Yes! Success! Soybean cultivation works here too, not just in Asia or America. We found that out thanks to a crisis.

For us it was clear from the start: We would only use GMO-free, organically grown soybeans for our tofu. But where from, actually?

What was still a relatively simple matter in the 1980s became a great challenge after 1996. That’s when the age of “green genetic engineering” began and the first genetically modified soybeans were cultivated in the USA. We were immediately affected: Up until that point we had been buying American organic soybeans. But what if our organically grown soybeans should get comingled with genetically modified beans?

It was a definite risk. Neither the farmers nor we could still guarantee that our product was completely free of GMOs. Since that time, we’ve been guided by this question: “How can we ensure that our tofu will always be what it should be ‒ a food that doesn’t just appear to be eco-friendly, but that actually does benefit people and the environment?”

For us, the answer entails staying independent of big agribusiness companies and putting our trust in nature rather than in genetic engineering.

In a stroke of serendipity, our company headquarters happens to be in Freiburg, in sunny Southern Germany. Soybeans love warmth and require many hours of sunlight. We had a feeling they would grow well in the Upper Rhine Valley if only someone tried to plant them here.

Starting in 1997 we encouraged organic farmers in our region to try growing soybeans. Most of them were skeptical. But eight pioneering farmers harvested the first ever soybeans in South Baden, grown on 40 hectares of land. The first year yielded mixed results in every sense of the phrase: not much protein in the beans, and too many weeds in the fields. Nonetheless, the quality of the tofu was good, so we persevered with this project.

Over the years, the original 40 hectares have increased to 3,000 hectares. This is not only good for us, but also for the soil: Soybean plants loosen the soil with their deep roots and have proven to be beneficial in the crop rotation of our contract farmers. Thanks to its little root nodules, the soybean plant fixes nitrogen from the air. It essentially fertilizes itself, and it leaves some nutrients in the soil for the next crop that will be grown on the same parcel the following year.

Today, the quality of our soybeans is no longer just “satisfactory”, but first-rate. However, our beans unfortunately remain the exception to the rule: Today fully 76% of the soybean crops grown globally are genetically modified − and that trend continues to rise. Most soybeans come from monocultures in the USA, Brazil and Argentina. Huge amounts are imported to Europe, where they are primarily used as animal feed.

Genuine agriculture instead of monoculture

It is possible to grow soybeans differently, as evidenced by our experience over the past 25 years. The soybean plant augments agricultural diversity in our fields, and it plays a part in our pursuit of an eco- and human-friendly agriculture that is truly worthy of its name.

So far, Europe produces only 7.5% of the soybeans it consumes. It’s high time for a change. And we are doing our bit.

Soybean quality is decisively determined by the quality of the seed. Find out more about Taifun’s seed propagation work. And naturally, it also depends on the variety. That’s why we breed soybean varieties that are perfectly suited for tofu and for cultivation here in the heart of Europe. 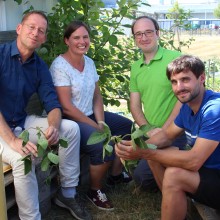 Questions about our soybean cultivation project? Our soybean department team would be happy to assist you.